I basically live my dream every day as an international sports broadcaster,  I cover and report on and from the biggest sporting events in the world including the last 4 Olympic &  Paralympic Games, the Laureus World Sport Awards, World Cups across sporting codes including the FIFA World Cup and ICC Cricket World Cups. I’ve mastered the sport interview and it’s one of my favorite parts of my job tapping in to the Champion Mindset of the world’s best athletes. My favorite interview? A recent sit down with Roger Federer who embodies class and poise, he certainly owned that room. On that day and countless others I am privileged to be in a wonderfully unique position to study human potential up close at the highest level of excellence and achievement, I love my role as a conduit in bringing the athletes story to the world!

The story that is yet to be told.

In all areas of life there have been women who have blazed a trail. And I have multiple role models across different periods of my life, but if I have to pick one that I think others could resonate with,  it’s a story that’s intertwined with my childhood. I’ve always been inspired by the strong, brave women in my family  and the story of Marie Curie.  Picture a few of my role models my two older sister’s, my mom and my aunt sitting around on a rug in our lounge playing trivial pursuit and that’s when I first remember hearing the name, Marie Curie (my first green wedge for science!)  and my mom relating her inspiring life story.  The tenacity, power of wonder and spirit of adventure to become the first person ever to win the Nobel Prize across two different sciences.

She championed curiosity and believed that science has great beauty, and for me in my 14 year career in Sport media, I’m a firsthand witness to the beauty in the science of winning.

It’s an exciting time for women’s sport and the growth trajectory it’s on. I’m excited because there is definitely more eyes on women’s sport than ever before, but underinvestment is a pivotal factor and I think Broadcast rights may have a long way to go in untapping the potential commercial value of women’s sport.

I could not get enough of the Tokyo2020 Olympic Games, one of the most gender equal games in history and the spotlight fell on both female and male achievers. The one beautiful aspect of an Olympics is the conversation it creates across genders, and I think when regular fans see male and female athletes both celebrating each other’s achievements, recognizing the struggle of the journey to get to the world stage and then not shying away from vocalizing that support on social media platforms, that’s where the magic of sport and its power flourish.Let’s see more of that across sporting codes!

Failure is not final and effort will always be rewarded.

You cannot get to where you want to be without visualizing it. So I would say Dream. And then dream bigger. That’s step one, then comes the hard work and that will get you a long way.

I’ve been able to interview the likes of Usain Bolt, Lindsey Vonn and Michael Phelps to mention a few in a packed male dominated mixed zone, ahead of the rest. So know that there are advantages in being different and standing out.

There is also no substitute for knowledge and substance and hard work. So be the hardest working person in the room.

I remember my very first sport profile I ever wrote was in Grade5. In an Exam I had to write about my favorite sportsperson and I could have celebrated right there that was going to be a breeze.

I knew everything there was to know about Steffi Graf. That she turned pro at 13, was No. 1 for a record 377 weeks and had 22 Grand Slam singles titles behind her name, not to mention the honorary gold she won at the 1984 Olympics. Her style, her athleticism I just loved her attitude too. My sisters (Candice and Bianca) and I would have a ritual. Watch her play in a grand slam then face each other in our own Cul-de-Sac tennis tourney and see who was the best “Steffi”.  You can imagine my Exam essay was lengthy and fact- filled. I would say to my then 10 year old self, one day you’ll get paid for this. And I’d tell my Grade 5 teacher, Miss Sanderson, thanks for the A, It probably led me to where I am today.

With my experiences of growing up in Africa and at that in one of the most dangerous and impoverished neighborhoods. Riding above circumstance and dreaming big, I’ve been privileged to travel to all corners of the world chasing the elite athlete story. I have a unique world perspective coupled with a deep desire and passion to decode the Champion Mindset. So from my corner expect more storytelling, deeper conversations and a deeper understanding of the greatest athletes story through my pretty awesome position pitch-side. 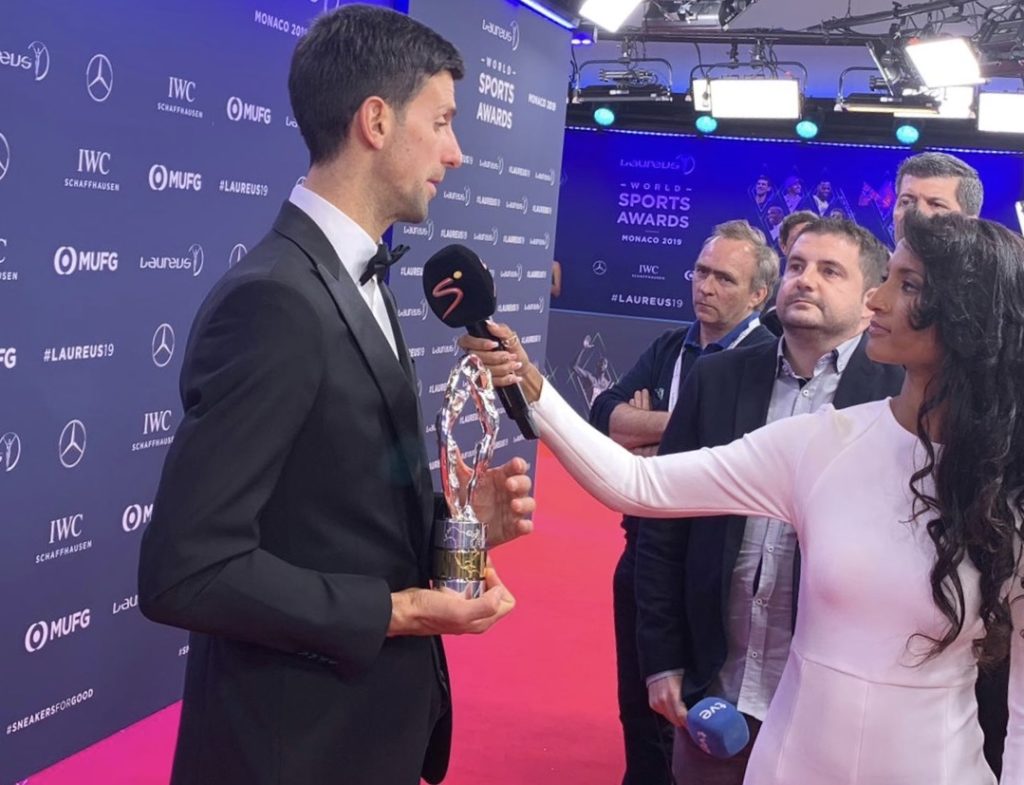