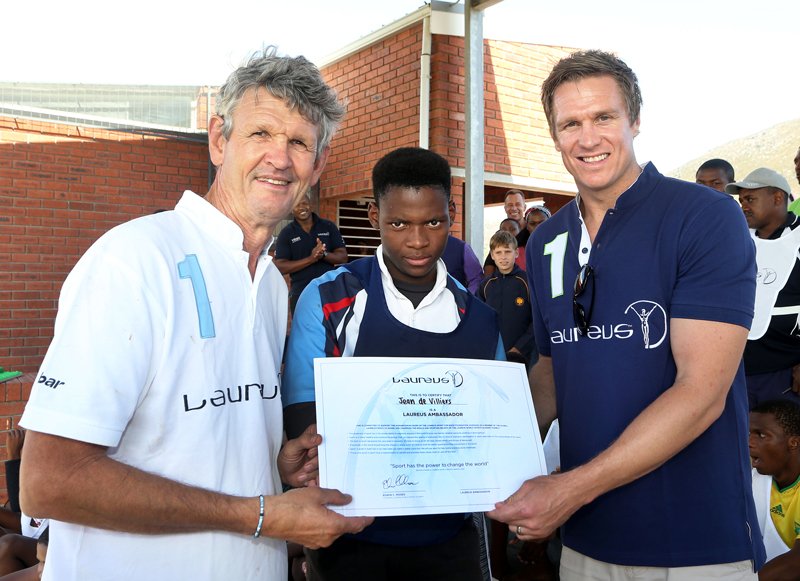 One of the most respected and popular players in world rugby, Jean de Villiers, enjoyed an extra special 34th birthday celebration today in Cape Town as he was named the newest Laureus Ambassador.

The South African rugby captain is one of the most experienced Springboks of all time. Admired around the world as an inspirational leader, both on and off the field, he is now on the road back to fitness after a knee injury which he suffered against Wales at the end of November. He is working energetically to be back to lead the side in the Rugby World Cup, which is now just seven months away.

Chairman of the Laureus Sport for Good Foundation in South Africa, Morné du Plessis, himself a rugby legend as manager of the 1995 Rugby World Cup winning team, said: “It’s a great honour to welcome Jean into our Laureus family. As a true ambassador for his country and the sport of rugby, his involvement in the work of the Laureus Foundation will definitely play a role in changing many lives through sport. We wish him well on his road to recovery and hope to see him running out for the Springboks in the Rugby World Cup later this year.”

And Sean Fitzpatrick, Vice Chairman of the Laureus World Sports Academy, who captained the All Blacks 51 times, said: “I know something about being a captain of a Test rugby team and the pressure that involves. Jean de Villiers has done a fantastic job as captain of the Springboks since 2012 and throughout he has also remained a caring person who believes that top sportsmen and women can help change and shape the lives of the less privileged. I warmly welcome Jean as a Laureus Ambassador. Laureus has done great work in South Africa and I know Jean will add even more to its ability to change the lives of young people there.”

Jean de Villiers, who has played 106 times for the Springboks, said: “It’s a huge honour for me to become involved with Laureus, whom I regard as one of the pre-eminent organisations worldwide ensuring sport adds value to the lives of people less fortunate than we are. From the Springboks’ side, we’ve been involved in a number of Laureus projects, not only in South Africa but also abroad, and I’ve experienced first-hand what a difference sport can make to people. By getting involved as a Laureus Ambassador, I’m hoping to keep on making a difference. I’d like to thank Laureus for affording me this opportunity and I know their projects will also inspire me.”

The announcement took place at Vuka Rugby, one of the projects supported by the Laureus Sport for Good Foundation South Africa. The youngsters took part in a rugby training session before joining Morné du Plessis in congratulating Jean de Villiers on his double celebration – and singing a special happy birthday to their rugby idol.

The Vuka Rugby project aims to get young people in the township and Cape Flats areas off the streets and onto the sports field. It has set up a league involving around 56 schools with matches played every Wednesday in their areas. This competition is called VUKA meaning ‘awakening’. The project also runs a life skills programme which links rugby training sessions focused on a specific area of rugby, for example ‘defence’, to a corresponding life lesson, such as ‘values’.

One of South Africa’s greatest players, De Villiers, who plays at centre, made his debut for the Springboks against France in November 2002. Less than a year later, injury struck during a warm-up match which saw him miss the Rugby World Cup tournament in Australia in 2003. After regaining fitness, he became a key player for a revived Springboks, scoring three tries in the Tri-Nations Championship victory in 2004.

Because of injuries he was only able to play for 40 minutes of the 2007 Rugby World Cup, which South Africa won, but in 2009 he was a vital part of the team which won South Africa’s third Tri-Nations title. He was one of the Springbok stars in the 2011 World Cup in New Zealand, where South Africa reached the quarter-finals, and was appointed captain in June 2012.

Jean de Villiers joins an impressive list of current and former sportsmen and women around the world who support and promote the Laureus Sport for Good Foundation. Ambassadors volunteer their time to work for the Foundation, whose mission is to use sport as the means to combat some of the world’s toughest social challenges facing young people today such as juvenile crime, gangs, HIV/AIDS, discrimination, social exclusion, lack of education, landmines awareness and health problems such as obesity.