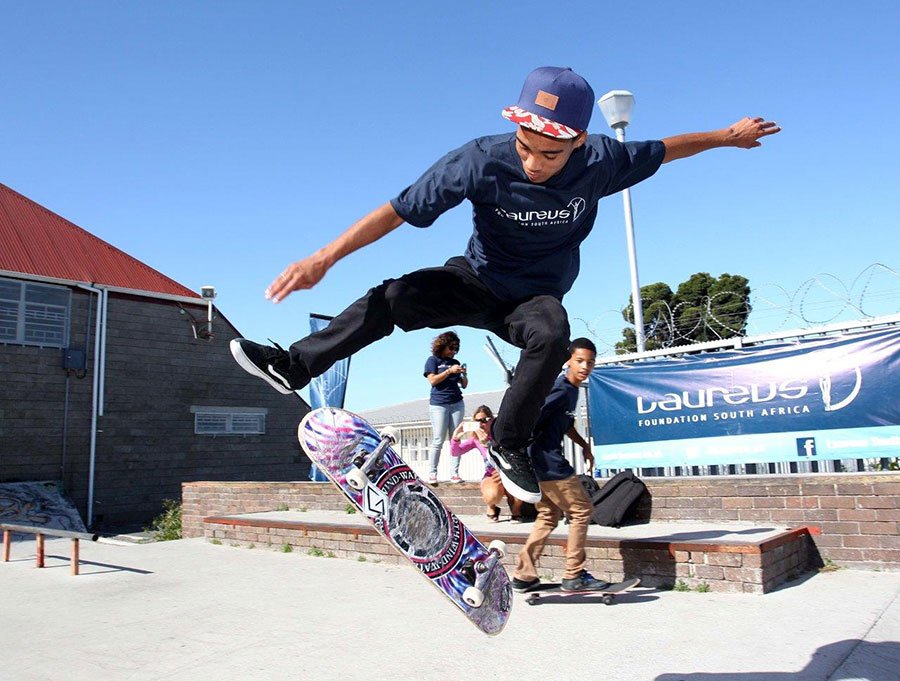 Standing at over six feet tall, 27-year-old Charl Jensel wears a broad smile and an afro hairstyle. Five minutes into our conversation, he’s grinning, cracking jokes and appearing to be content and motivated by the sport he loves.

“When you set foot on a skateboard you want to do something,” he enthuses. “You see an amazing trick and you want to do it yourself. That creates goals in you, man. You get addicted to it and there’s no going back to your old life.”

The old life Charl speaks about was tough. He grew up in Cape Flats in South Africa’s Western Cape, and like many of the youngsters around him; staying in school was a struggle. He found himself mixing with the wrong crowds, dropping out of education and falling into trouble. “In my community today, kids drop out of school like nothing you could imagine,” he says. “Drugs and gangs rule the streets. They’re the most dominant role models encouraging kids to do negative things.”

Charl describes himself as a lucky one. Skateboarding saved him. Today, he oversees the work of the Indigo Youth Movement in the Western Cape, a Laureus-supported programme which teaches life skills through the sport of skateboarding in both Durban and the Western Cape in South Africa. In the communities in which the programme runs – mostly densely populated township areas – life is tough and sport is powerful.

“There are very few role models in these communities and there are so many negative distractions so the programme is so important. I have a lot of kids telling me if it wasn’t for skating and for this programme that they would have been in trouble today.”

Charl goes on to provide proof. He sees himself as a ‘big brother’ for the youngsters in the programme and talks candidly about an incident which happened recently.

“A sixteen year old kid got shot dead, he was part of the programme,” says Charl, his voice suddenly sombre. “About a month or so before it happened he started missing sessions at the programme and hanging around with the wrong people. At the moment gang war is taking place in our communities. He got shot down on the spot, mistaken for someone else.

“The kid who got buried that day he was only 16 years old. Teachers and parents from his school were there at the funeral; he was one of the kids I actually got back into school. Kids know, if you’re not in the programme, you can get into trouble. We’re getting to that point here in South Africa I think.”

“I started on the kerbs, man,” Charl says, discussing his first footsteps on a skateboard. Skating gave him goals, an opportunity and a way out of the community he was in.

Although he dropped out of high school, Charl had a goal and a vision in life to be the best skateboarder he could be. Working at a local skate park, Charl was living his dream, skating every day. “I thought I was going to work there for the rest of my life. The fact I am sitting where I am today is a testament to the power sport has to change.” 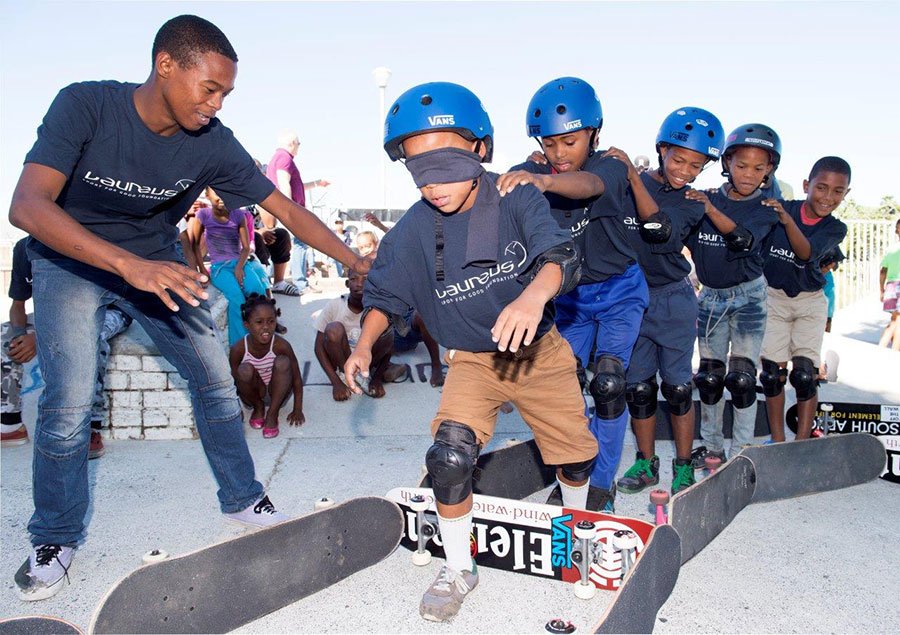 A closed mind-set opened up

Top South African skateboarder Dallas Oberholzer, who ran the Indigo Youth Movement in Durban got in touch and asked him to start something positive in his own community.

At first, he declined. “I had a closed mindset; I didn’t think skateboarding was a sport, I didn’t realise the power it had.” After a visit to meet Dallas, Charl’s eyes were opened, his mind was made up, he was going to start giving back and making a difference.

“I saw the movement, I saw the programme in action and the respect the kids had for each other and for their elders. This was what was needed where I come from, that’s what is lacking, there is no discipline and that’s when I told them that I’d get involved. I wanted to make a change.”

Through being involved in Indigo, Charl was involved in the Laureus Youth Empowerment through Sport (YES) programme, an initiative to empower young people to become leaders, teaching valuable life lessons through sport.

Through his shift in mindset, Charl himself returned to education. Growing as a skateboarder and mentor to young people, his eyes were opened up to opportunities around him. “I felt like there was something missing,” he recalls. After speaking with his parents, he received the support he needed and returned to college to complete his studies, two years after setting foot on a skateboard.

Although he’s in charge of a sports programme, Charl’s role reaches further than the half-pipes of skate parks. “Yesterday one of the kids asked me to help get him back in school. I missed 70 days of school when I was younger and now I’m telling everyone in the project to stay in education, all because of skateboarding.”

Inspired by a legend

Laureus Academy Member and Skateboarding legend Tony Hawk has a special affiliation to Indigo Youth Movement, visiting the project on two occasions to find out first-hand the impact it is having on young people in the local community.

Hawk said:  “Indigo is proof that skateboarding can change the world.”

“It was very inspiring to see kids that life in these little villages and have the option to go and do something as different as skateboarding and see how they embrace it. They really love the challenge of it, they love the action, they love the exercise and it was fun to see how they interpret skating.”

“It gives them self-esteem, helps them in their careers. I also think just the act of skating can teach so much about self-confidence, self-motivation and overcoming your own challenges, as oppose to only participating in team sports, where you are relying on the team or relying on the coach to tell you what to do. That is an important aspect of maturing, but I think the idea that skating is as much a form of self-expression as it is a sport and an art form is as important as well. 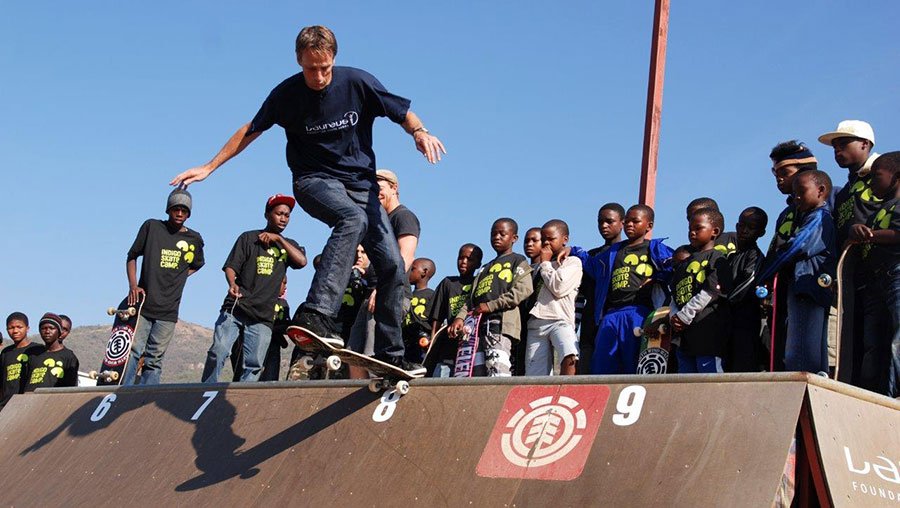 A leader for the future

Charl is philosophical about the future of the programme and his goals and aspirations for the young people in the communities he works with. “I’m just stoked that I can change these kids’ lives. They learn things every day and that’s very important, that’s how you grow.

“These kids would honestly have been lost, they would have had nothing without the programme, now they’ve got hopes and dreams and a way out.”

The Indigo Youth Movement is the brainchild of Dallas Oberholzer, whose background in international skating competitions inspired him to create opportunities for young people to learn about skateboarding.

The project has introduced young people to skateboarding and created an opportunity to increase the youngsters’ life-skills and self-confidence. The Laureus Sport for Good South Africa supports 16 projects across the country and since its inception in October 2002 has raised over R50 million (2,9 Mio. EUR) for projects which have helped to improve the lives of over 90,000 young people up until 2016.

Find out more at https://www.laureus.com/realheroes/