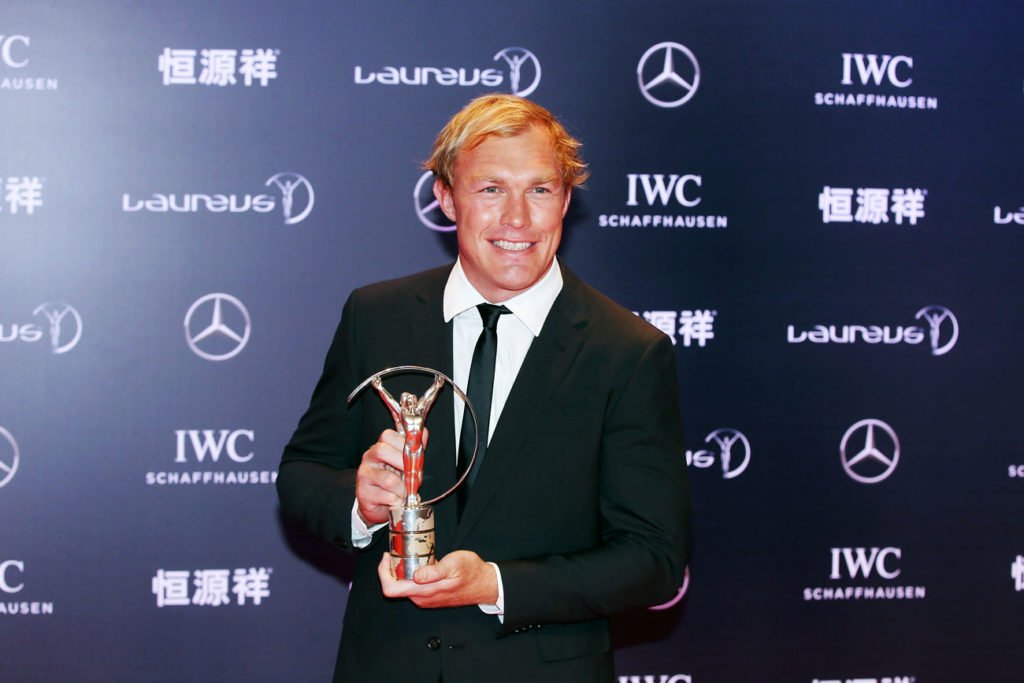 There was an emotional welcome from the guests at the Awards Ceremony at the Shanghai Grand Theatre for South Africa’s Schalk Burger, who won the Laureus World Comeback of the Year Award after recovering from life-threatening meningitis to win his place back in the Springboks rugby team.

Serbia’s Novak Djokovic won his second Laureus World Sportsman of the Year Award after another brilliant 12 months which featured a second Wimbledon victory. He said: “This is probably the crown of my 2014 season that has been highlighted with winning Wimbledon, regaining No.1 in the world and becoming a father. It has probably been my best year so far in my life.”

Oliver Bierhoff, manager of the Germany team, was at the Awards Ceremony to receive the Laureus World Team of the Year Award following the historic victory last year when Germany became the first European team to win the FIFA World Cup in South America. It was Germany’s fourth World Cup triumph.

Bierhoff said: “At the final whistle we were together on the pitch, the coaches, players, team staff members, it was such a connection amongst us. For the coaches and some of the players and me it was a ten year project. And we were so happy at this moment.”

Ethiopia’s Genzebe Dibaba was named Laureus World Sportswoman of the Year after breaking three world records in different events in two weeks. She is only the third person in history to achieve this feat, along with athletic giants Jesse Owens and Usain Bolt.

Australia’s Daniel Ricciardo was named winner of the Laureus World Breakthrough of the Year Award after a brilliant rookie season in which he won three Formula One Grand Prix for Red Bull. He said: “The year was awesome, one of those years which I think was as good as it could get without actually winning a title. Definitely a breakthrough in my career.”

There was a double success for the United States with wheelchair racer Tatyana McFadden winning the Laureus Disability Award and Alan Eustace receiving the Laureus Action Sports Award after his record-breaking freefall from the edge of space.

Host nation China was celebrating after the Laureus World Sports Academy gave two special Awards. Retired tennis star Li Na, who has fostered a dramatic growth of the sport in China after winning two Grand Slam championships, was given the Laureus Academy Exceptional Achievement Award, while basketball legend Yao Ming, who had a stunning career with Houston Rockets until he retired in 2011, was honoured with the Laureus Spirit of Sport Award.

During the event, it was also announced that Yao Ming and Indian cricket legend Sachin Tendulkar had been elected the newest members of the Laureus World Sports Academy.

The Laureus Sport for Good Award was presented to the worldwide skateboard programme Skateistan, which uses skateboarding as the means to change young people’s lives in countries such as Afghanistan, Cambodia and South Africa.

The Awards Ceremony is attended by legends of sport past and present and celebrates the achievements of the greatest sportsmen and sportswomen of the year. The Host Partner of the 2015 Laureus World Sports Awards is Chinese textile and wool company HengYuanXiang Group (HYX), and the event has received the strong support of the Shanghai Municipal Government.

“The Laureus World Sports Awards is one of the most influential awards in the world and a fitting affirmation and praise for the world’s outstanding athletes,” said Mayor Yang Xiong. “We all love sports and the athletes’ relentless spirit in pursuit of success in the game. The persistence and spirit of enterprise from the athletes makes us truly comprehend that sports can promote understanding and tolerance and deliver friendship and peace. Sport has the power to change the world. Tonight, let us show our highest respect towards those outstanding athletes for their indomitable spirit of sports.”

Shanghai is a city enthusiastic about sport and promoting sports. Here you can find many international competitions held in this city, and there are many sports facilities around. This is the very first time Laureus World Sports Awards came to Shanghai, which is a big event in the sports history of Shanghai.I believe tonight’s ceremony will inspire more young athletes in Shanghai to fight for their dreams.

The ceremony is infused with a Chinese element. The Laureus World Sports Awards opens to the sound of the Chinese drumming. In the glittering and glamorous Lujiazui, in the hustle and bustle of urban streets, in the delicate and tender Jiangnan garden, every scene reflecting Shanghai is in the background and the video of the awards ceremony, showcasing an attractive, chic, and modern international metropolis. Famous Chinese dancer Huang Doudou and Song Jie performed in a dance called “Moves of Bamboo,” conveying the beauty, grace and power inherent in Chinese traditional culture. World-renowned baritone Liao Changyong and former world champion Liu Xiang, who has just announced his retirement, sing together a song called “The Flow,” showcasing the energy of Chinese athletes. It presents a beautiful Shanghai and speaks a moving Chinese story on the stage of the LaureusWorld Sports Awards.​

Shanghai, one of China’s most iconic travel destinations and one of the most spectacular cities on Earth, is a perfect location for the 2015 Laureus World Sports Awards. A popular tourist destination renowned for its historical landmarks, such as The Bund, City God Temple and Yu Garden, as well as the dramatic Lujiazui skyline, it is a showcase for the booming economy of China. Shanghai mixes old world charm with a modern and vibrant city, perfectly blending the past and present. Shanghai annually hosts some of the biggest sports events in the world, including the Formula One Chinese Grand Prix and the IAAF Shanghai Diamond League meeting.

Enjoying a long-standing reputation in China, HYX is a leading force in the textile and garment industry. In recent years HYX has evolved into a modern enterprise developing its own unique ‘brand and culture’, through brands like ‘HYX’, ‘Fazeya’ and ‘Nanonan’. For many years, HYX has actively focused on sport and been a partner in sports events like football, basketball, gymnastics and marathon. In December 2005, HYX became the first non-sports textile and costume sponsor in the history of the Olympics and three years later became the first partner of the Chinese Olympic Committee, customizing the Olympic kit for Chinese athletes.

The ‘Eternal Love’ programme, co-founded by HYX and the China Children and Teenagers’ Foundation, has won the China Charity Award twice, being honoured as the No.1 activity for caring for orphaned and disabled children in China. Also, the ‘HYX Literature Star High School Students’ Writing Contest’ has become the most influential event of its kind, attracting the largest number of contestants. In 1997 and 2007 HYX supported the ‘10,000 Teenagers’ Recreational and Sports Activities’ event in Tiananmen Square, in Beijing, China, to promote the health of teenagers.